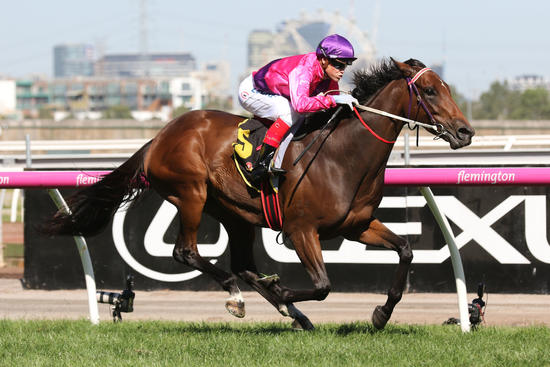 Trainer Ken Keys has achieved a goal of getting a stakes victory with Spanish Reef and will now give the mare her chance to chase even more black-type success.

Spanish Reef, the $2.50 favourite, sat just off leader Jester Halo in Saturday’s Group Three Matron Stakes (1600m) at Flemington before taking over inside the final 300m to land her biggest win at her 12th start.

Damien Oliver had to switch course on Samovare ($3.10) at a crucial stage before the mare picked up again to get within three-quarters of a length of Spanish Reef with Jester Halo another 1-1/2 lengths away third.

Keys has four-year-old Spanish Reef nominated for next month’s Group One Coolmore Legacy Stakes (1600m) at Randwick during The Championships.

“We felt this has been in her for a while and she’s just continued to mature and improve,” Keys said.

“And I think the longer this horse races, the stronger she’ll get.

“There’s plenty of options in front of her. There’s the Sunline Stakes coming up in Melbourne and I did have the cheekiness to enter her in the Coolmore.

“There is another race in Sydney coming up, the Epona Stakes over 1900 metres which might be a better option. We’ll get over today and I’ll have a talk to (jockey) Craig Williams and see what he says.”