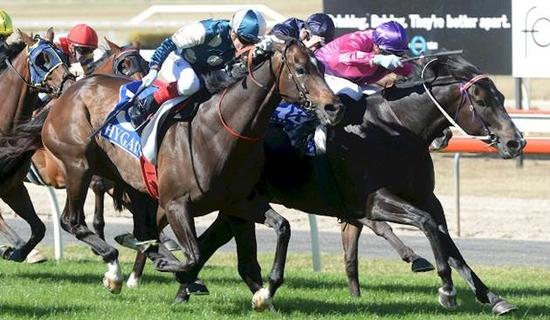 “This has been one spring to remember.” Ken Keys was speaking for himself, but it was appropriate for both trainer and jockey after the running of Sunday’s Kilmore Cup at Seymour.

The Cranbourne trainer combined with Jye McNeil to win the $150,000 event with Al Passem.

The son of Al Maher condemned Japanese import A Shin Rook, who finished runner-up in last month’s Seymour Cup, to second placing once again with a fighting performance.

Keys, who described Al Passem as an ‘Elvis’ lookalike, was thrilled to see the gelding land a feature win.

“He’s just a fantastic horse to train and he deserves one of these better races,” Keys said of the five-year-old, who has now won five of 27 starts.

It was Al Passem’s first success this campaign, but Keys celebrated feature success earlier in the spring with Soul Patch, who won the Group 2 Moonee Valley Vase on Cox Plate Day.

Flemington was also a happy hunting ground for McNeil, who celebrated his first G1 success aboard Kings Will Dream in the Turnbull Stakes, and he was delighted to round off a big few months with a win for Keys.

“Kenny’s been a great supporter of mine so it’s good to combine for a nice win here today,” he said.

“I thought it was a good training performance as well, because he had that tough run at Flemington over the Carnival and Kenny’s obviously freshened him up nicely for this run today and he toughed it out nicely.”